We use the most advanced FDA approved hair removal system for our patients. 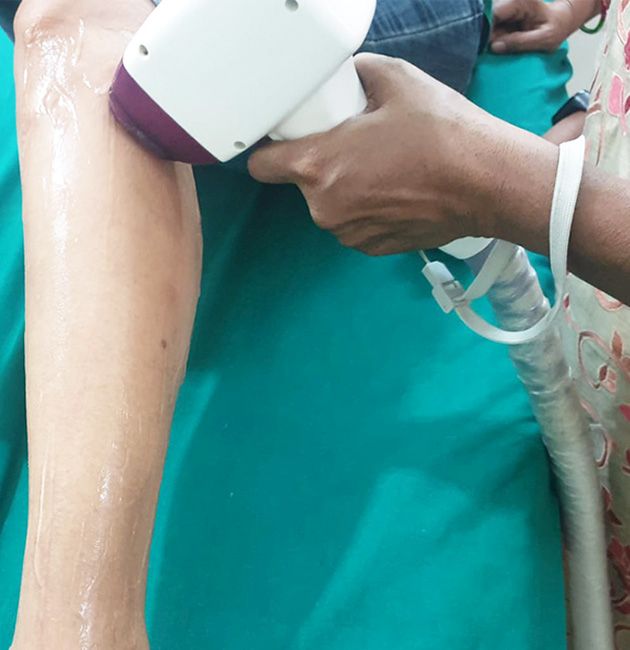 Amish Hospital offers the most technically advanced medical care and cosmetic solutions. If you wish to seek laser hair removal In Vadodara by India’s most reputed cosmetic surgeon, walk into Amish hospital for trusted hair care.

What is laser hair removal?

Removing those unwanted hair has been a cumbersome task to many people, men and women alike. Waxing, shaving and epilators do the job, but the results may vary. These means of hair removal are temporary as hair grows back within no time. The newest addition to the removal of unwanted hair is using a laser or concentrated beam of light.

Laser hair removal effectively delays the regrowth of hair for long periods. In this procedure, the light emitted by the laser is absorbed by melanin, a pigment in the hair. The light energy, which is converted into heat, damages the hair follicles or the sacs within the skin. When these tube-shaped sacs are damaged, they inhibit hair growth or delay them.

Remember, laser hair removal is not a permanent solution. It delays hair growth and, in some cases, inhibits growth. You may need multiple treatments for initial hair removal and maintenance treatments as well. The best part is, though laser hair treatment is most effective on light skin with dark hair, it can be effectively used on all skin types.

Why is laser hair removal done?

There is just one reason why anyone would undergo a laser hair removal procedure, to remove unwanted hair! It can be used to treat various parts of the body that include arms, legs, armpits, chin, upper lip, and bikini line. The treatment is not limited to these areas and can be used on any part of the body with unwanted hair, except the eyelids and the surrounding area. Additionally, it cannot be used on skin with a tattoo on it.

Did you know the success of laser hair removal is influenced by the skin type and the hair colour? As per the basic principle, only the pigment of the hair should absorb the light and not the pigment of the skin. The laser should target only the hair and not damage the skin. And hence, the best outcome is received where there is a contrast between skin and hair colour, such as the combination of light skin and dark hair.

Skin damage is a risk that is most often a result of little contrast between skin and hair colour. Though technology has made improvements, and laser hair removal caters to dark skin, it is less effective on white, blond, drey, and red hair colour as they don't absorb light well.

As much as many people would like to hear a 'Yes!' to whether laser hair removal is permanent, the answer is, unfortunately, 'No!'

Laser hair removal puts the hair follicles into the state of dormancy for a long time and delays hair growth. It works better than waxing and shaving! When the hair grows back after a while, they are thinner, more delicate, lighter, and less in number. Though it doesn't get rid of unwanted hair permanently, it is touted as a permanent solution as it reduces the number of hair that grows back.

What are the benefits of laser hair removal?

The first and the most obvious benefit of laser hair removal is that it removes unwanted hair and delays its growth. The other benefits include

Precision, speed, and predictability are the vital benefits of laser hair removal that you can enjoy by scheduling an appointment at Amish Hospital.

What are the risks of laser hair removal?

Yes, there are certain risks associated with laser hair removal. The risks of side effects differ from one person to another and depend on the hair colour, skin type, and treatment plan. The risks and complications include

You can avoid these side effects if you adhere to the guidelines provided by your doctor.

Laser hair removal has gained a lot of popularity lately due to the results it offers. There are many hospitals and clinics that offer this service which has started replacing traditional hair removal methods. While many people have experienced permanent hair loss after a few sessions, it is vital to remember that laser hair removal is not a permanent solution. You may want to consult with the specialists at Amish Hospital if you want to get rid of the unwanted hair on your body.

Amish Hospital is a multi-speciality hospital that started in 1998 with an aim to provide high-quality healthcare to all patients. Since then, we have come a long way in providing quality service under various disciplines, with laser and cosmetic surgery being one of the most integral parts of the aesthetic promise made by us.

Our 18-bed state of the art Burn Care Center is located at the centre of the city and just a kilometre and a half away from the nearest railway and bus station. The Burn Care Center has two operation theatres that are well equipped with all the essential infrastructure and equipment needed. We also offer different rooms to cater to people from different walks of life, such as the Deluxe room, special room, and semi-special room. We also have a conference room and a spacious waiting lounge.

Amish Hospital believes in being up to date with the latest technology. Hence, we combine the latest scientific development with teamwork, technique and technology to provide quality service at an affordable price. We offer various cosmetic surgeries and skincare to enhance our patients' physical appearance and emotional support. If you are looking forward to undergoing laser hair removal in Vadodara, you may schedule an appointment at Amish Hospital.