Looking For The Best Lipodissolve In Vadodara?

Lipodissolve or mesotherapy entails a series of injections & medication that are supposed to melt localized fat deposits. Amish Hospital offers the best lipodissolve in Vadodara. 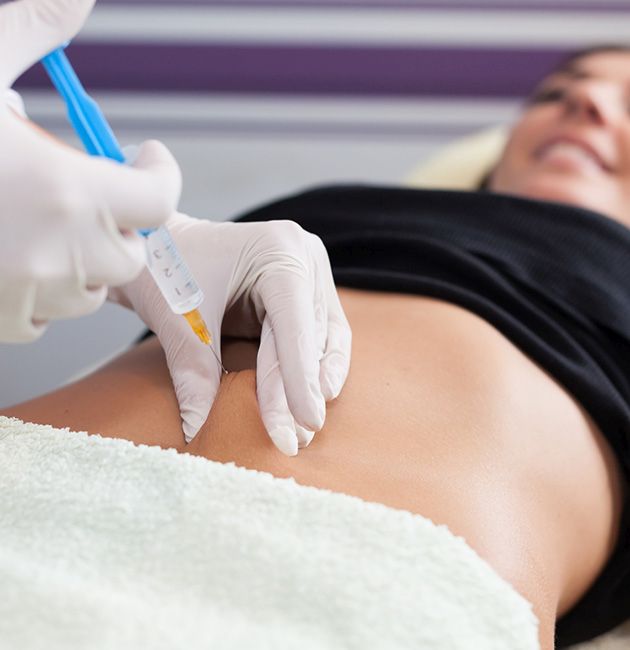 Amish Hospital offers the most technically advanced medical care and cosmetic solutions. If you wish to seek lipodissolve in Vadodara by India’s most reputed cosmetic surgeon, walk into Amish Hospital for trusted body care.

Lipodissolve is a non-surgical and innovative substitute for liposuction. It became popular in the mid-2000s. The other term used for Lipodissolve is Mesotherapy. It is a cosmetic treatment during which a solution is administered into the areas affected by fat and cellulite. It removes the extra fat from our body by breaking down the bonds that hold the solid body fat. The liquid form of fat can then be removed much more quickly from our body. The treatment procedure has shown remarkable results in eliminating and smoothing cellulite.

FDA has not approved this procedure yet as the effectiveness and safety of the Lipodissolve injection had not been proved till now. Many reputed physicians don’t tend to use this treatment procedure. Instead, they opt for some other alternatives like non-surgical body contouring treatments.

There are excellent options for Lipodissolve in Vadodara, with Amish hospital being one of the best.

What are the uses of lipodissolve?

Lipodissolve can be administered to various body parts, including the belly, chin, arms and legs. It removes the deposited fat that is generally not affected by diet or exercise and can also be used as an effective technique for cellulite treatment. However, post-treatment swelling can be noticed after the treatment. It creates a more toned and firmer appearance without the need for tuck or lifts surgery. It diminishes the cellulite by stiffening healthy skin around the site of Lipodissolve injection.

In the traditional liposuction procedure, fat cells are suctioned out of the body. But the action of Lipodissolve is entirely different. The wall of fatty cells are broken down, and later the fat is flushed out from the body in the form of waste. Lipodissolve can be used for belly fat, flabby arms and double chin.

Amish Hospital has an experienced team of cosmetic surgeons who offer Lipodissolve in Vadodara. While it is believed that Lipodissolve cost in Vadodara is high, it is vital to note that it is as affordable as any other cosmetic procedure.

Lipodissolve treatment is a chemical injection consisting of vitamins, enzymes and a soy protein called phosphatidylcholine. Phosphatidylcholine is a safe substance used by doctors for treating high cholesterol.

Once the Lipodissolve solution is introduced into the target area, the molecular bonds which hold the solid fat molecules are dissolved, converting the solid fat to liquid. Then the natural waste filtration organs, including the intestine and liver, are used for flushing out the fat out of the body. The completion of this fat removal procedure can take from several weeks to a few months. Improvements in the affected area are generally observed after four weeks of treatment.

Lipodissolve treatment can be used in all body parts with small stubborn fat but is generally ineffective with large fats. To determine whether you need to opt for liposuction or Lipodissolve, you must consult your doctor. The Lipodissolve cost in Vadodara varies from one hospital to another based on various factors. But for better clarity regarding the price and the procedure, call Amish Hospital.

How to recover from lipodissolve?

The recovery process for Lipodissolve is rapid. You don’t need to take any leave from your regular duties while following the treatment. You can consult your doctor about carrying out some activities like driving. About an hour after the surgery, you will experience a slight burning sensation around the treated area. The other discomfort experienced will be slight bruising or swelling around the area of injection. Some of the patients might also experience fever, nausea, or dizziness. Your Lipodissolve doctor will guide you thoroughly on how to reduce the side effects. For more information, you may visit Amish Hospital.

My protruding belly had become a reason of embarrassment for me on various occasions. So my friends suggested that I go for a Lipodissolve to help me get rid of the extra fat. As I was vigorously looking for the best doctors for Lipodissolve in Vadodara, I found several options. Out of the various options, I visited Amish hospital, and they provided excellent service and cost-friendly.
Rajat Thokas
Though I was fit, the double chin used to make me look very fat in all my selfies. It was an excellent reason for discomfort for me, then I heard about Lipodissolve. With a slight hope, I went to Amish Hospital to get my treatment done. I would like to mention that they provide high-quality service and are empanelled with professionals. I was in doubt earlier, but after availing of the services, I am so satisfied that I would recommend the place to everyone who wants to go for Lipodissolve in Vadodara.
Deepshika Nagpal
I was really worried because of my recent weight gains. None of my exercise or diet was working. Being a mother maintaining my weight has always been a challenge for me. So I thought of permanently resolving it. I was checking online for Lipodissolve cost in Vadodara, and my friend recommended me to consult Dr Shah. His services are very feasible, and the staff of Amish hospital are highly trained, courteous and polite. They take good care of the patients. I will recommend the place to others for sure!
Sneha Singh
A few months ago, my aunt visited Amish Hospital for Lipodissolve. She came to Vadodara especially for her treatment, as the Lipodissolve cost in Vadodara is very affordable compared to rates in other cities. After the surgery, the doctor even suggested various post-treatment techniques to eliminate any side effects. My aunt was really happy with the results, and she had also recovered completely without any side effects.
Pinky Sharma
Amish hospital offers one of the best treatments of Lipodissolve in Vadodara. Dr. Umesh's years of experience will surely help you in treatment. The staff at Amish hospital are also caring and helpful.
Gauri Singh
Amish Hospital provides the best medical care for Lipodissolve in Vadodara. My experience at Amish Hospital was amazing. Special thanks to Dr. Umesh Shah and his amazing team to help me and guide me properly throughout the treatment.Highly recommended.
Shrutika Nilakh
He’s not just a plastic surgeon he’s an artist, I’ll explain. After calling about 20 locations all around Vadodara, Dr. Umesh Shah's office was the easiest in scheduling a consultation. The consultation was very short & precise. They provided the best treatment for Lipodissolve in Vadodara. When I got home I immediately saw amazing results.
Sudhir Chaudhary
I have been fat since my teenage and wanted to find a good solution so I surfed the net which guides me to a treatment called Lipodissolve in Vadodara. I visited Dr Umesh Shah of Amish Hospital and got treated. I found the treatment very effective with no side effects.
Gautam Thakkar
I did Lipodissolve in January 2020. The experience was great. Dr. Umesh is experienced, knowledgeable, and so easy to talk to. He made my experience a delight, I will definitely recommend her to my friends. The lipodissolve cost in Vadodara is high but here in Amish Hospital, it is very low.
Saras Modi
I was really amazed when I came to know about the Amish Hospital's impartial Lipodissolve cost in Vadodara. So immediately made an appointment for a consultation. After the consultation, I made up my mind to undergo the surgery. Thanks to all the staff of Amish Hospital who helped me a lot through the surgery.
Vishal Jadeja
Previous
Next

Ready to lose some fats?