Looking For The Best PRP In Gujarat?

PRP treatment for baldness is a three-step clinical therapy where an individual’s blood has been removed, processed, and injected into your scalp. Amish Hospital offers the best PRP in Gujarat. 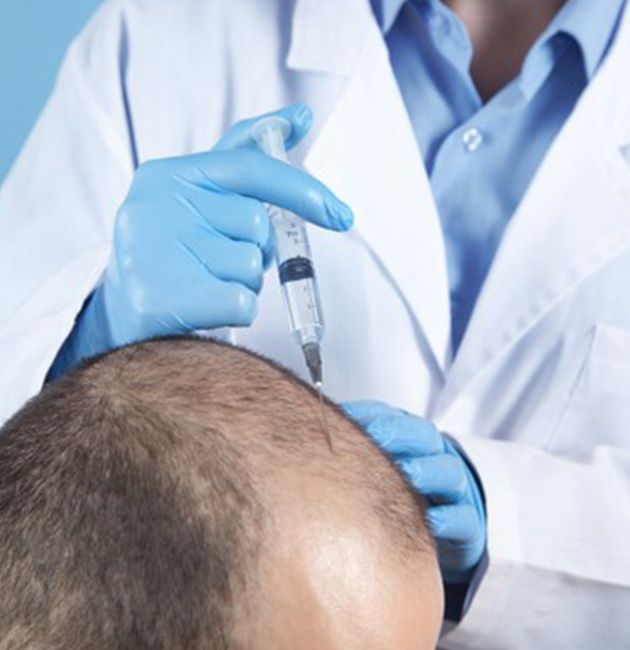 Amish Hospital offers the most technically advanced medical care and cosmetic solutions. If you wish to seek PRP in Gujarat by india’s most reputed cosmetic surgeon, walk into Amish Hospital for trusted hair care.

What is PRP hair treatment?

An autologous and non-operative technique used to help the hair follicles in the scalp grow new hair is known as platelet-rich plasma therapy or PRP hair treatment. Certain kinds of platelets present in PRP promote hair growth by reactivating the dormant hair follicles.

Is PRP therapy safe to be used?

PRP is considered very safe for patients because it doesn't threaten allergies, foreign-body reactions or hypersensitivity. Previously, PRP has been used in many different medical and surgical fields as well. However, using or opting for PRP is entirely a personal choice, and it is advised to consult with a professional and do some research before finalising. PRP takes the good, functional cells from the scalp and reinjects them into the area they are needed, making it a natural and safe process.

PRP involves using your own, unmodified cells eliminating the risk of getting a blood infection from any other human being. Also, being your cells, your immune system accepts them. In the case of PRP therapy in hair restoration, the complete medical data and clinical trial records are still awaited to prove the exact effectiveness of the treatment. Thus, PRP should not be considered as a cure for hair loss as of now. There is no 100% guarantee of individual effectiveness, and claims regarding the outcomes cannot be made because approvals from FDA are still pending.

How does PRP treatment work?

In males, androgenic alopecia (male pattern baldness) is a commonly seen type of hair loss, and similarly, in females, female pattern baldness is common. PRP hair treatment is effective for both men and women. In PRP, platelets are prepared in concentrated plasma. The optimal plasma concentration is yet to be established, but current methods use 300-700% enrichment. Thus, platelet concentrations are gradually increased to more than 1000000 platelets/L. PRP has the ability of wound healing, thus has been successful in attracting the attention of various medical fields.

These proteins, when released into the hair follicles, act directly on the stem cells. By bulging the area of follicles, they promote new hair follicles growth and neovascularization. There is published work available in Europe and the United States that proves the safety of PRP. Since the past two decades, speciality fields like oral surgery, plastic and cosmetic surgery, neurosurgery, sports medicine, orthopaedics have used PRP as an efficient treatment that yields positive and effective results.

The PRP effectiveness in hair restoration is in the early stages of scientific research. As of now, FDA has approved DHT blockers and Minoxidil therapies. Supposing you are based in Gujarat, the average PRP cost in Gujarat can depend on how many sessions of treatment you require to get the desired results. Some hair transplant procedures use PRP therapy in conjunction as well.

Who is the ideal candidate for PRP treatments for hair loss?

Mainly two types of patients are considered while using PRP treatments for hair loss, and include-

The reason for considering these people is because greater success and better outcomes have been observed in them.

What are the benefits of PRP treatment?

PRP has been an effective and preferred treatment because of several excellent benefits it has. Some of the significant benefits of PRP include-

PRP has also been proved helpful in treating many other patients with conditions requiring medical and surgical treatments. Several actors, including the doctor's qualifications and experience, can influence the PRP cost in Gujarat and other cities.

What are the side effects seen in PRP treatment?

PRP possesses a significantly less risk of infections and allergies since the patient is treated with their plasma. Very subtle side effects like minor bruising, itching, and swelling of the treated areas are observed in some patients. Depending on an individual's standard healing period, these effects recede in around two to five days.

I found that the PRP cost in Gujarat, especially at the Amish Hospital, was much more considerable and worth it. The treatment was very effective and precisely done by Dr Shah. I am delighted with the outcomes, and I would definitely recommend Amish Hospital to anyone looking to get PRP treatment.
Tushar Raje
I got my mother’s PRP treatment done by Dr Shah at the Amish Hospital. He is a very understanding and encouraging doctor. He took interest in what we had to say and answered all your concerns and doubts in the best way possible. Though the PRP cost in Gujarat was high, we were offered reasonable prices at Amish Hospital. Seeing the results and care my mother received from the entire staff and the doctor himself, I was very happy.
Sonali Jagtap
Previous
Next

Ready to regain your hair?